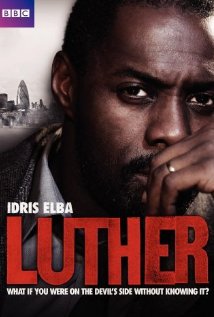 Let it be known that I have a soft spot for most things BBC including Vera, Sherlock, River, hinterland, and now best loved, there is Luther, or at least five seasons of Idris Elba playing the prize fighting cop on the edge of self-destruction.

This series is so powerful and the writing so good that I have had to take a break from the first season. Usually, I would say this is a bad sign. One should watch obsessively or “binge watch” until the last episode, if something is truly that good. But when the murder weapon is hidden, in the first episode, in such a disturbing place, one can only stop and mentally prepare oneself for the next onslaught.

The funny thing is that I watched this show on French tv and of course caught none of the nuances except that there was an exceptionally handsome man playing the lead character and he liked to get beaten up or beat himself up quite a bit.

What a revelation to find the program in English, only to find it has disturbed my sleep to no end. And why is that? Well, in one short word, Elba.

He is a clever, broken man, always on the trail of a psychopath, and if he doesn’t slow down he might internally combust. Again, the writing is so slick that it hurts to watch him propelled forward by a highly volatile energy within, which he cannot control.

I must leave now to go and eat a chocolate chip cookie and contemplate this more.